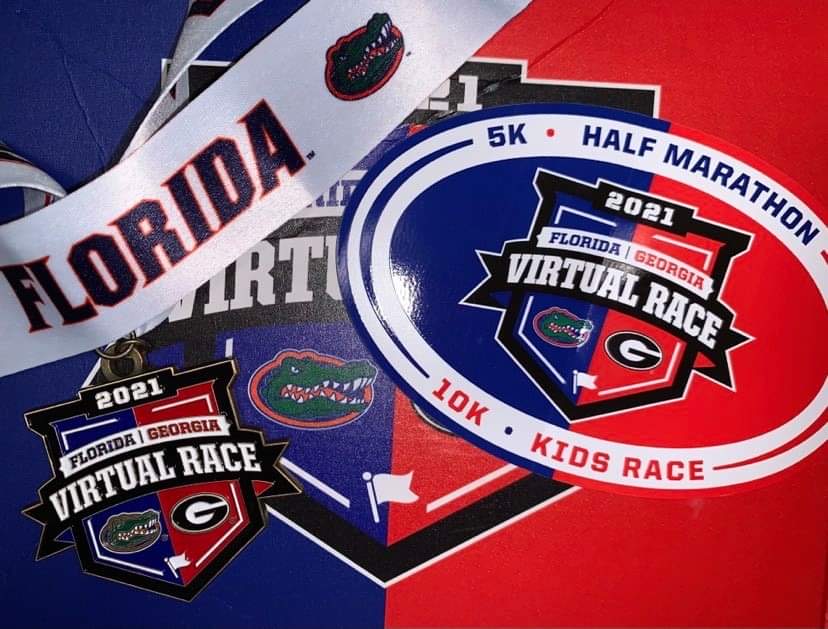 You’ve Got A Friend in Me

“In all kinds of weather, we’ll all stick together.”

University of Florida, “We Are the Boys”

My friend Mike and I recently ran a virtual 5k together—together being a relative term since he lives in Nebraska and I live in Florida. He had perfect running weather in the 40s. Though it was early morning, I endured temperatures in the mid 70s with high humidity.

The virtual race was a contest for miles between University of Florida Gator fans and University of Georgia Bulldog fans—two longtime rivals, especially for me having grown up a diehard Gator in Jacksonville, which is where the two football teams play each other every year. (The Gators won.)

Mike grew up in Iowa, and he likes football, but he’s pretty neutral on the Gators.

However, he has seen them play because, though we met in 2015 in Missouri at a mutual friend’s house, we both were present at the 1983 Gator Bowl, which featured Iowa against the Gators, frankly a rather boring 14-6 Gator victory that no one much remembers.

What I do remember is that it was so cold that when I walked back to the parking lot postgame my feet at first had no feeling and then hurt like crazy. And this is not merely the Floridian complaining. The temperature was 35 when the game started, and the wind chill made it feel like 18. More importantly, the Iowan remembers how cold it was too.

When Mike and I met, we somehow realized we’d both been at the game.

Me? I started talking fate. We were destined to meet and become friends, but we’d missed our chance in 1983. Mike? That was silly, but he was glad to be friends now.

In fact, though Mike and I share important things in common and even superficial things such as enjoying running, we differ quite a bit.

We both like movies and have missed them during the pandemic. I, however, tend toward lighter fare. Disney, anyone? Mike sees every serious film out there and all Oscar nominees.

I love Harry Potter. He’s never read or watched it.

Mike loves music and has seen 289 bands perform live. He’s written a book on the subject of heavy metal, which I can’t listen to because it makes me anxious.

Even with running, Mike prefers 5ks, and he uses a stopwatch to time himself because he doesn’t own a smart phone. I prefer longer distances and need my Apple watch to confirm any activity actually occurred.

Yet we are great friends because we appreciate the differences. In spite of my Harry Potter references in our email exchanges, I’ve never tried to change Mike’s mind about reading the books (though, yes, I still think everyone should). Mike occasionally will send me YouTube videos of some of his favorite heavy metal bands performing. I click on them and watch briefly, but he knows I’ll never be a metal head.

We are (and Mike probably won’t get the Disney reference) like Timon and Pumbaa from The Lion King, not caring that we are different species and making no attempt to change each other. Instead, we recognize the importance of acceptance in friendship.

Thich Nhat Hanh explains that “True love always brings joy to ourselves and to the one we love. If our love does not bring joy to both of us, it is not true love.”

Too often, our relationships lose this joy out of the desire to make our loved one into the image we have rather than loving the person for who that person is in that moment. We cling to the past, refusing to allow someone to change. We get to know the person better and are disappointed to learn that he is not the image we created at the start of the relationship.

True friendship based on love, however, brings joy and comfort and weathers all storms.

As Timon and Pumbaa remind us, Hakuna Matata! It means “no worries for the rest of your days,” and that “problem free philosophy” has its roots in true friendship.

That’s the kind of friendship that Mike and I have created so that my Iowan friend now living in Nebraska and I will wear our matching Gator shirts while sporting our race medals. Unfortunately for me, the weather is all wrong since the shirt is long sleeves, but I can wait until cool weather comes back in six months with the confidence that my friendship with Mike will still be strong.

For, as we Gators sing at the end of the third quarter, “In all kinds of weather, we’ll all stick together.”