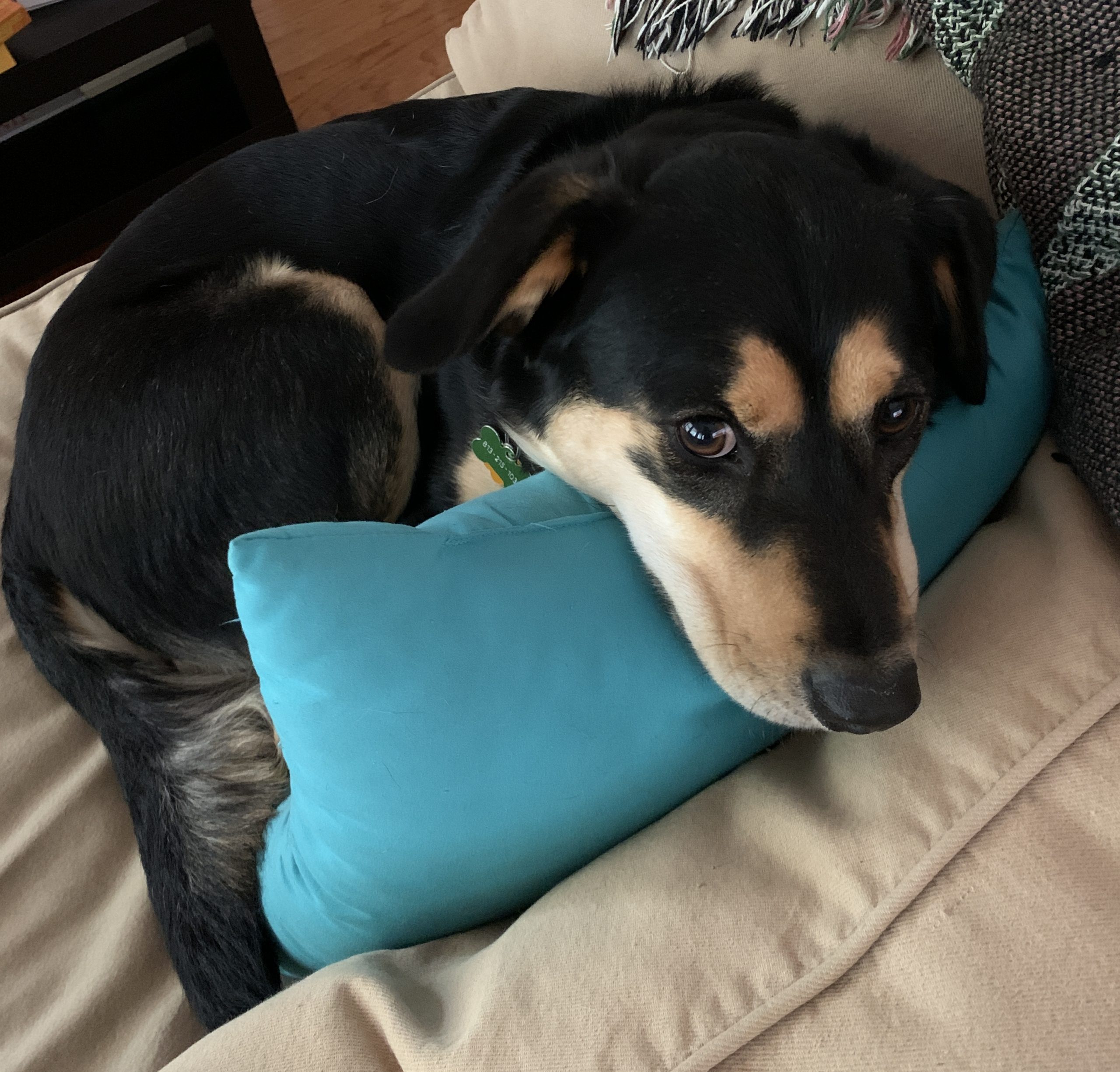 “Your true home is in the here and the now.”

I’ve written previously about our dog, Omarius, whom we adopted from the Humane Society at age three. We’re his third family. Rescued animals come with unknown histories, of course. Thanks to some medical problems, we do know that at some point Omarius was shot and still has pellets embedded in his chest.

We’re lucky, because in spite of this rough treatment, he is good-natured and completely sweet. He’s integrated very well into our home, which includes two cats. It’s taken some time, training, and love.

But he is hard to take on a walk. He’s always very excited to go, and he can manage seeing people now. He even has a group of friends who will stop to say hi, give him pets, and praise his improved behavior when we chance to see them. He still can’t manage other animals, especially dogs, which I do my best to avoid. Even hearing barking disturbs him. He pulls, spins around, and pants like crazy with anxiety.

In this way, he reminds me of Marlin, the clownfish from Finding Nemo. Like Omarius, Marlin, who is Nemo’s father, has suffered trauma. The movie opens with Marlin and his “wife,” Coral setting up home at the Drop Off. Marlin boasts about the views and space that their hundreds of children will get to enjoy. Alas, like all good real estate, that comes with a cost, in this case, predators. Within the first few minutes, Coral and all but one of the children become fish food.

Understandably, this makes Marlin a cautious father. On Nemo’s first day of school, which Marlin clearly has deferred and would like to postpone even further, Nemo swims around excitedly trying to rush Marlin.

Marlin, however, reminds Nemo that the ocean is not safe and proceeds to go out and then back into their anemone home three times to check for any danger explaining that four would be better.

When Marlin learns that the day’s school lesson will take place at the Drop Off, he fearfully races to retrieve his son. In doing so, he speaks repeatedly in front of everyone about Nemo’s poor swimming due to one shorter fin and tells Nemo, “You’ll start school in a year or two.” Upset and embarrassed, Nemo swims straight out toward a boat and gets captured, starting the main action of the film.

You can’t blame Marlin. That’s how trauma works. As Rick Hanson writes in Buddha’s Brain, those who experience trauma can feel completely disassociated from the traumatic event but continuously triggered by events that remind them unconsciously of the moment of trauma.

This is why Marlin needs Dory, a fish with memory problems. Her inability to remember leads to all sorts of comedy and, yes, to peril, but, in fact, Dory has the advantage over Marlin, for in addition to frequently forgetting where they are going or why, she is fearless and open to new experiences. There’s no traumatizing Dory. Without her, Marlin would fail.

When Marlin and Dory get lost on their quest to find Nemo and Marlin panics, Dory forces him to pause, saying, “Relax. Take a deep breath.” Throughout, she sings or says, “Just keep swimming.” In other words, persevere and don’t let fear and trauma pull you back into the past.

The movie revolves around balance. Nemo, as all young must, figures out how to be confident while not being too risky. Marlin recognizes that a parent’s desire to protect has to be partnered with an ability to allow his child to “Just keep swimming.” Dory’s memory actually improves thanks to being part of an adopted family. When Marlin starts to leave her sure that their quest has failed, Dory tells him to stop, saying that “No one’s ever stuck with me for so long before.” She explains that  being with him has improved her memory because, “I look at you, and I’m home.”

I can’t actually ask him, but I’m pretty sure that’s what’s happened with Omarius too. He looks at my daughter and me and knows he’s home. Whatever happened in the past is still there for him, but he knows we’re going to stick with him and that he’s finally home.

And when you’re home, as Finding Nemo shows, you can safely explore.

The movie ends with Marlin telling Nemo, “Now go have an adventure,” and, more importantly, the very last line of the movie is, “Bye, son.” Having overcome his trauma, Marlin can trust his love and trust his son.

May we all find our safe home with those who love and trust us.